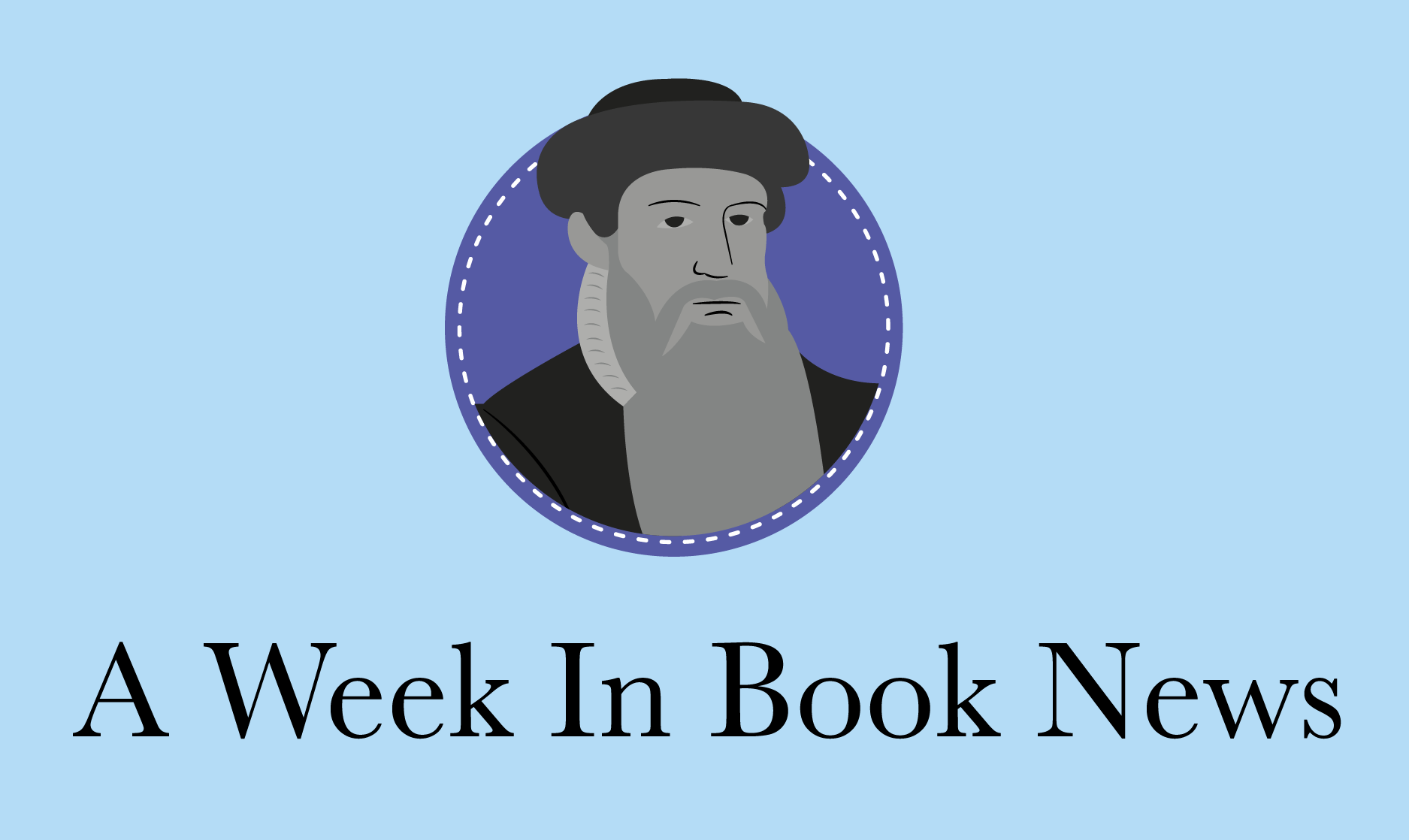 Girl sues council for plans over library closure – and wins

A girl and her family have won a legal challenge against the Northamptonshire County Council over the planned closure of 21 libraries.

The UK council, led by the Conservatives, has been declared bankrupt twice in six months. The planned closure was part of its effort in saving £70m this year.

The two legal teams arguing the case at Birmingham High Court on behalf of the girl – and another member of public – in July 2018 maintained that the council failed in its duty to provide libraries to the community. The council should have considered the impact of the closure on children, especially those who come from low-income families.

The economics professor who wrote on Forbes recommending the replacement of libraries with Amazon services should learn a thing or two from our little girl.

ASA to Amazon: if it’s not one-day delivery, don’t claim it is

At the time of writing, Story Of Books editor is waiting for Scott McCloud’s book, “Understanding Comics”, to be delivered, nine days after the order was placed. Sure, it is a standard free delivery but “five working days” really means two weeks plus weekends.

Being an Amazon Prime member, we could have opted for the one-day delivery service offered on Prime-labelled products – but that’s no guarantee either.

Last week, the Advertising Standards Authority (ASA) ruled that a December 2017 advertisement that promoted the “one-day delivery” service as part of Amazon Prime membership to be misleading. The ASA had received 280 complaints from mostly Amazon Prime customers who didn’t get their packages within one day.

The ASA said the advert breached the CAP Code (Edition 12) under these rules:

The advert, ASA insisted, “must not appear again in its current form”. The regulatory body instructed Amazon “to make clear that some Prime labelled items were not available to be delivered by the next day”.

Who would have thought. The man that played Ted in “Bill & Ted’s Excellent Adventure” is now a book publisher. But we’ve always known Keanu Reeves to be the smart, brooding type who contemplates a great deal.

His imprint, X Artists Books, is inspired by the craft of bookmaking as well as storytelling. Looking at X Artists’ selection of books, you can tell they would appeal to the serious design type or the writers who are into typography.

The actor is not new to book publishing. In 2011, Reeves and visual artist Alexandra Grant collaborated on a book, “Ode To Happiness”, published by Steidl Verlag. The German company also published another collaboration of theirs, “Shadows”. Grant is Reeves’s business partner at X Artists Books.

Obama’s has shared a reading list on Facebook, which also includes VS Naipaul’s “A House for Mr Biswas”. 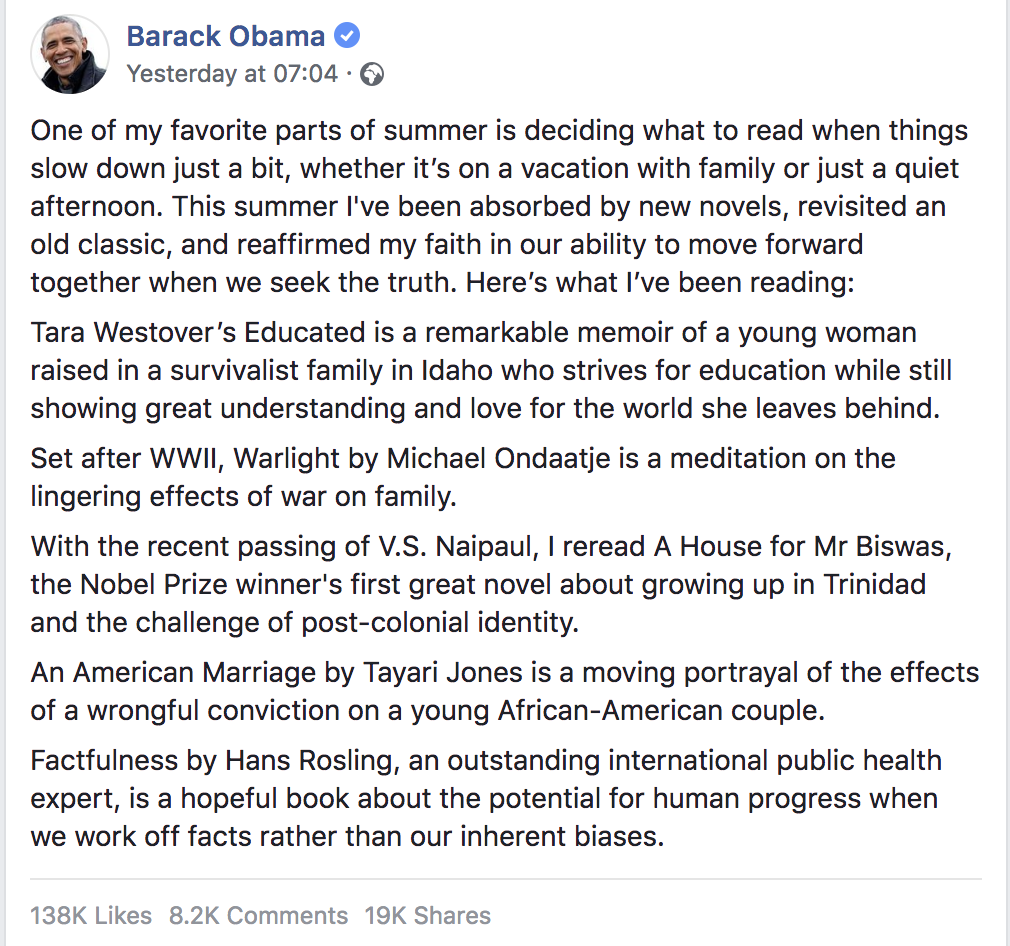 VS Naipaul wasn’t the nicest man around. His writings and views on race polarised not only the readers but also those in the literary world. We had to study “A House For Mr Biswas” for our English Literature degree in the 1990s and we found it racist.

I learned from his caste snobbery, his misogyny. I learned from his exacting style and from what he left out – women’s lives and worlds. I learned that I had to critique what I was taught to revere. #InAFreeState and #IndiaAWoundedCivilisation changed my writing life. #VSNaipaul

No doubt, in 1961, this “postcolonial” novel would have pleased the middle class redbrick university-type publishers that Naipaul, a Trinidadian of Indian descent, sought to appease for his social advancement. But how is calling a Chinese character “fish-face” or making fun of black women acceptable*? In 1961, he got away with it. Not in the 1990s and not now.

VS Naipaul was a gifted author, a complete asshole, a misogynistic twat, and an unpatriotic ingrate. It's OK to mourn the passing of a great son of the soil while acknowledging that he was a dick #triniproblems

Naipaul was also not known to be kind to his wife, his publisher and his best friend. His sisters are still not informed of his funeral by his second wife.

No doubt any future biographies on Naipaul would promise a lot of dirt but we just can’t be bothered to read them.

*In “A House For Mr Biswas”, a lady of African descent (described by Naipaul as “a fat negro woman”) comes to a shop and asks for a pair of “flesh-coloured” tights. A shop assistant gives her a pair of black tights. The lady objects and kicks a fuss. This episode is meant to be funny. We don’t find it funny at all.

This is my only abiding impression of VS Naipaul.

"I read a piece of writing and within a paragraph or two I know whether it is by a woman or not. I think [it is] unequal to me."https://t.co/xkNlwAEVKy

Diana Athill on VS Naipaul

‘I worked very hard at keeping affection for him’ (The Guardian, 17 August 2018)

Author Will Self claimed that he reads “as many as 50 books at once”. Other authors and the general public simply do not believe him. They call him a brag.

We believe him. He reviews books, so it’s not impossible.

But we are not as prolific as Self. We read two books at once – currently a Neil Gaiman non-fiction and a comic book – and there are six other comic books that we have yet to open.

You know what the Japanese call it? Tsundoku. Books piled high to be read. Apparently, it has something to do with a hunger life state. You have to dive into Buddhism to find out more.

A cure for plant blindness

Sales of print books are steadily growing. We’ve known that for quite some time. We’re slowly coming out of recession and we now want a health balance between online and offline activities. Reading a physical book offers us that opportunity to get off the grid.

For publishers looking for ideas on what to sell next, why not capitalise on our growing love for gardening and outdoor leisure pursuits?

The Wall Street Journal, of all papers, recently reported on the rising number of US citizens who can’t identify plants. This phenomenon is called “plant blindness”. It’s not a new thing and certainly not exclusive to the US or any developed nations. It’s a global phenomenon.

The editor of Story Of Books used to edit digital publications for a publisher of life science journals, with two being agriculture titles. It is observed that humans tend to identify animals much better than plants. The former is not only reared for meat consumption; they can also be companion animals. But unless you’re a gardener or a nature lover, you won’t have the social incentive to recognise plant types.

So how about that? Books on plants. 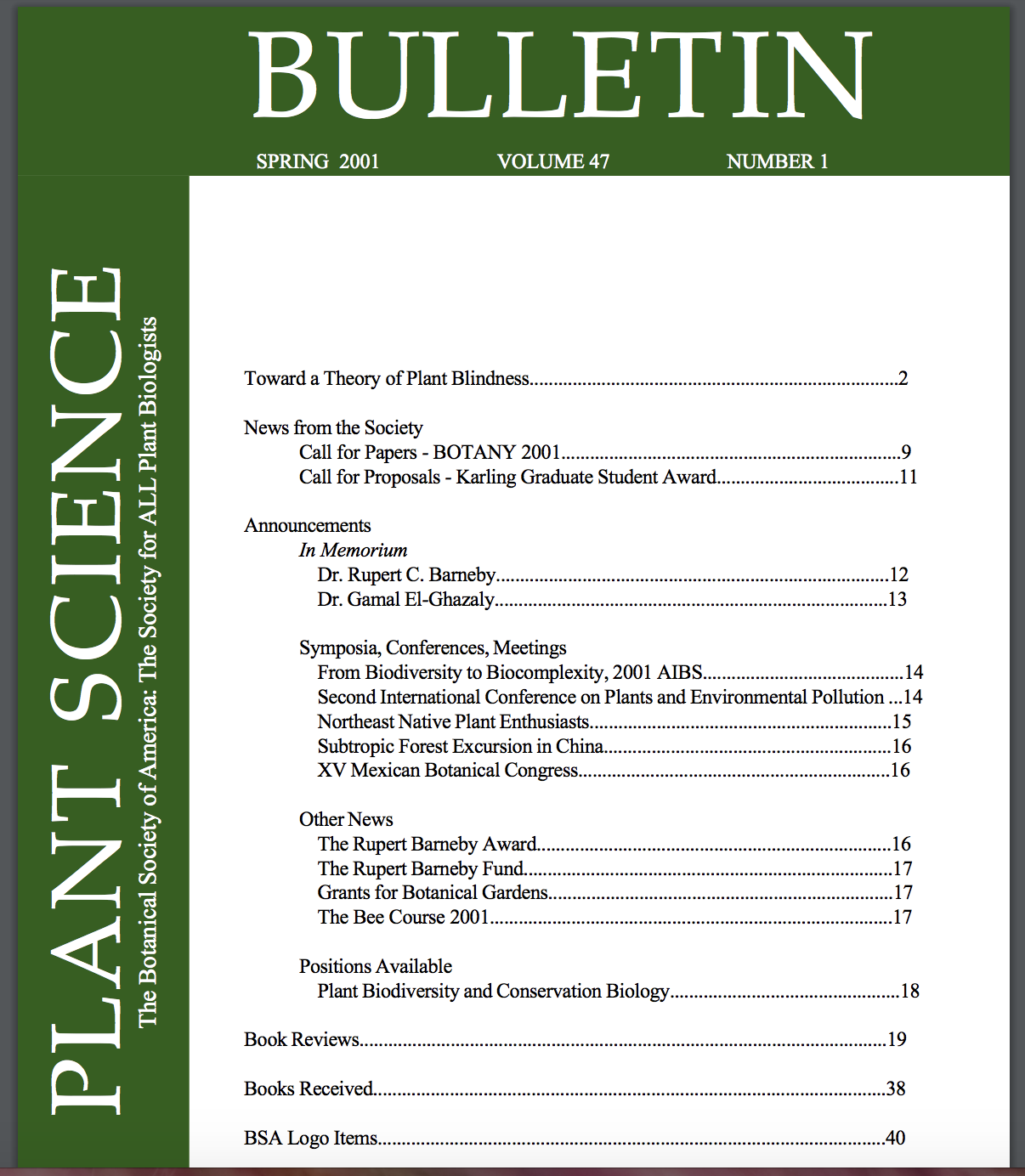