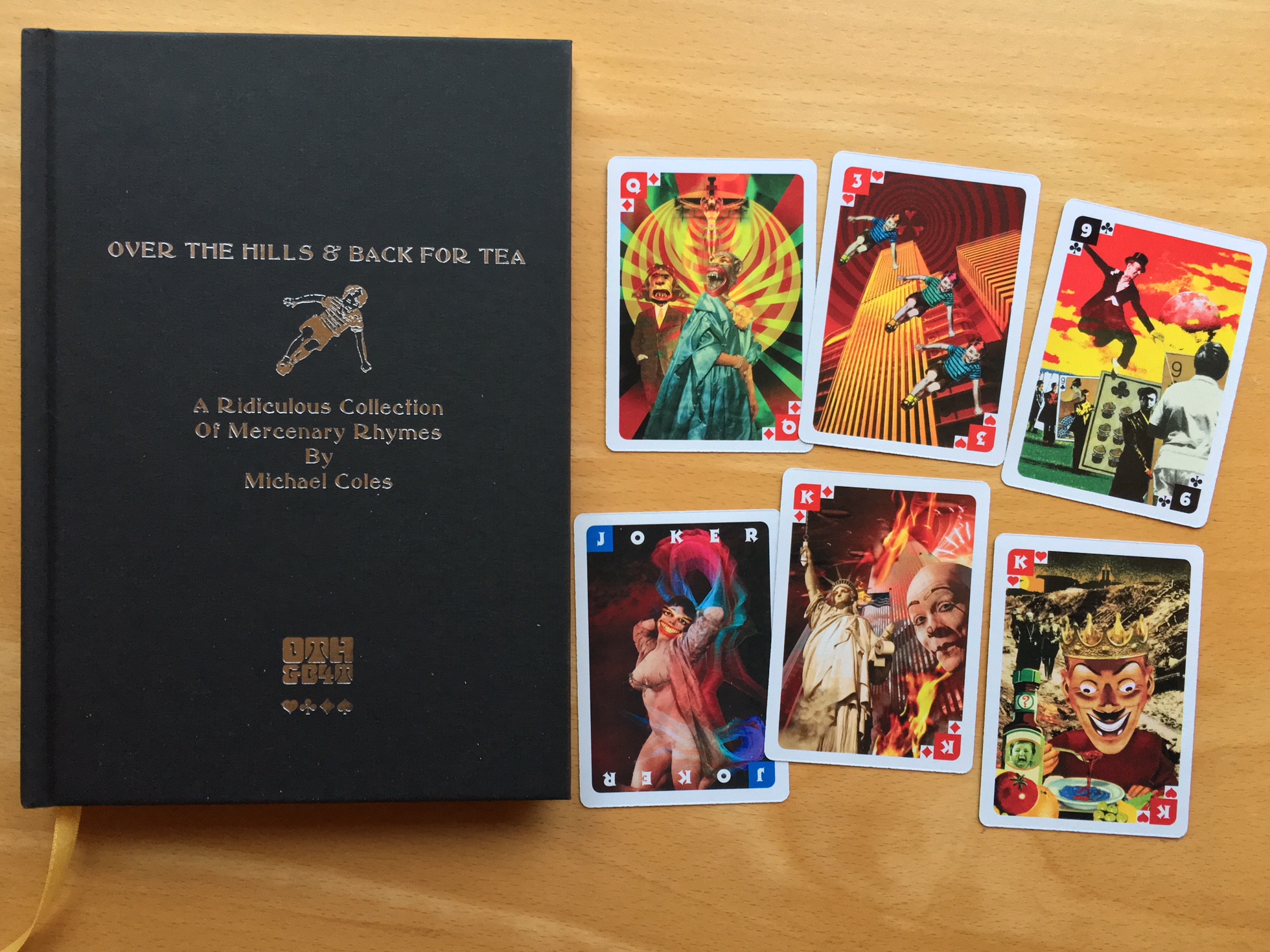 The sand in your toilet roll: Over The Hills & Back For Tea makes a debut

Michael Coles’s book of 56 mercenary rhymes is finally out. Over The Hills & Back For Tea was launched on Bank Holiday Friday at the 5th Base Gallery in Shoreditch, London, UK.

At the launch, Story Of Books got to view an exhibition of Cole’s print illustrations, also based on the book’s artworks. The show will run until Wednesday, 29 August 2018, so don’t miss it.

The record label is the publisher of Over The Hills. Fancy that, a punk record label that publishes a book on nursery rhymes.

The inspiration behind the artwork for Over The Hills is partly derived from the previous artworks that Coles had done for the band’s album covers and music videos. Equally impressive are the sumptuous border decorations that frame the characters in the print illustrations. Coles didn’t apply these ornate details to the book. That somehow makes the book and the prints distinct from each other in their forms.

Coles works with musicians and his approach to his graphic work is informed by the way they constantly remix and deconstruct their own music.

He “borrowed, embellished and contaminated” lines from traditional rhymes like he appropriated the traditional border decorations for his illustrations. As a result, Over The Hill the book and the artwork come across as mischief sugar-coated in a construct of wholesome delight.

So where is he taking this next?. “I plan to expand on the work and write a ‘history’ of each character,” Coles said, “and then I am going to create a chapel”.  A chapel?

“The Chapel of Bleeding Gum,” he said with a grin. It’s a reference to one of the characters, Psycho Delia, who prays at the Church of The Bleeding Gum and lies at confessions. Well, every character in the book is outlandish – a caricature cruelly visualised and inscribed in rhymes – but each is a comment on the person that hides behind our mask of civility.

Story Of Books can’t wait for the next Over The Hills project. For now, we settle for the book and the playing cards – yes, there are sets of 56 playing cards, too, featuring the same artwork. We’ll have fun reading the mercenary rhymes aloud.

We first heard about the four-month e-book embargo imposed by Tor Books, the science fiction division of Macmillan, in July this year.

The embargo, currently a trial, will be used by Macmillan analysts to observe how library e-book availability affects the sales of retail e-books.

Unsurprisingly, there have been rumblings amongst librarians in North America and on book forums. The Canadian Urban Libraries Council (CULC) sent letters to Tor Books’ Fritz Foy, the President and Publisher, and Tom Doherty, the Chairman, to object against the embargo.

In the letter to Foy, CULC says that its libraries spend “$90 million annually on collections including $11 million on digital resources” that are used by some 65% of Canadians.

“This adversarial approach you are implementing is a direct affront to readers who rely on public libraries for access to their educational and recreational reading materials,” the organisation said.

CULC asked Tor Books to look at the increase in “indie or self-publishing” and how this could affect the publisher’s bottomline. It highlighted: “Six out of the current ten top-selling science fiction books on Amazon are self-published.”

It’s a pity to hear that publishers have to resort to embargoes to protect profits and digital rights management (DRM). But in the end, libraries and their members get penalised.

In the UK, authors loaning their works for free from public libraries are compensated by government fund under the Public Lending Right Scheme. This scheme has been extended to cover e-books and e-audiobooks beginning 1 July 2018.

The Public Lending Right scheme is managed by the British Library on behalf of the UK Government, with more than £6 million of payments made to 22,000 authors, illustrators, photographers, translators and rights holders annually.

The number of teenagers reading books as a hobby is declining, according to a psychology journal. The reason? Digital games and social media. This is a big deal. Reading fictions could potentially increase children’s and teenagers’ understanding of people from different cultural backgrounds.

A 2018 study by Sacred Heart University, Connecticut, US, found that children that read fictions display a higher level of cognitive and affective ability. But there’s a catch.

The researchers found that test scores were higher in children who read “literary” fiction, compared with those who read “pop” fiction.

Also, the effect was significant in children that read less than their peers, implying that the impact might also be reduced in children already too familiar with literary fiction.

The study puts the spotlight on reward and stimulus within children’s reading activity. Diminished emotional response to literary fiction from overexposure can’t be a good thing, either.

This means literary fictions can’t afford to be boring. Storytellers have to be a bit more imaginative and publishers can’t be too complacent by sticking with “formulas”. These are important in nurturing young readers’ interest in books.

Holding down a job (or two) and writing fictions

At the moment, we are revisiting some old writings and drafts – some good, some bad but all swept aside due to full time work in journalism and publishing.

That’s the problem with ‘writing jobs’ that we English majors discovered when we ‘fell’ into a career. Structured news reporting, journalistic prose, copywriting, sub-editing and grammar are not necessarily creative writing. Long hours and deadlines leave little time for creativity*.

Along the way, we discovered that the ability to tighten up house styles, spotting typos and killing adjectives in meandering sentences – highly desirable in news reporting, trade publishing and press releases – are not the same as the ability to tell a compelling story.

You’re lucky to be a grammatical pedant and a fantastic storyteller at the same time. However, that doesn’t happen often. In fact, the most innovative of writers – or shall we say poets – just rip up the rules and let rip on the pages. And they hire a good sub-editor.

Jumping into creative writing from the ‘comfort’ of full-time employment is a big step financially. A few of the people we have featured on Story Of Books are holding down full-time roles whilst devoting their free time to writing fictions. We hope the list below will inspire our friends:

What authors did before they became known as ‘Authors’

*The editor, as a junior reporter, was reprimanded by a production editor for writing a short story using the office PC on deadline day.