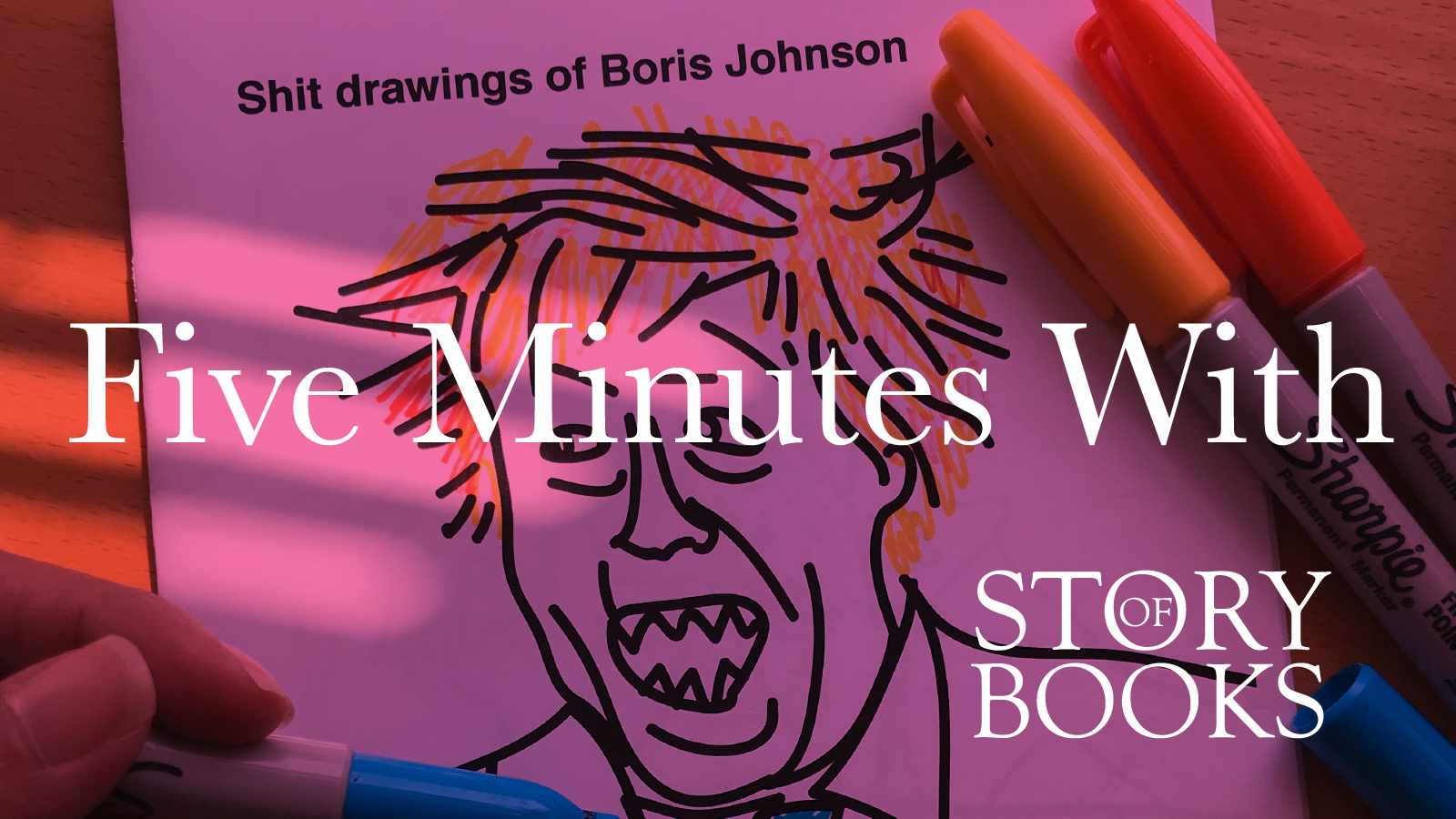 It’s a shame political landscape has to be so dire for creatives to be cornered into revealing their true voice. Mark Beechill found that spark earlier on through his poetry and most recently, his colouring zines of Brexit politicians. To him, creative expression can’t wait for the endorsement of an arts degree. Drawing and writing must also be self-taught. And there is an economic logic in testing one’s ideas through zine publishing.

We first came across your works at last year’s London Art Book Fair at Whitechapel Gallery. Shit Drawings of Boris Johnson was a sell-out at the show. Our Creative Director had since spent her time colouring in that zine – and also Shit Drawings of Theresa May.

The concept is so simple but memorable: colouring zines on Boris and Theresa. They were totally spot-on. How did you come up with the idea? Did you draw them as well? (The Creative Director thinks the strokes are excellent).

I did indeed draw them. I think they came about after I exhibited at a book and zine fair in Norwich in 2017. The guy next to me, an artist called Natty Peterkin, had made a zine called Badgers Are Wankers (or something to that affect), which was a series of really primitive, childish sketches of badgers being idiots. I suppose it could’ve been any animal but the fact that he’d chosen something so harmless and undeserving made it funnier. I just liked the immediacy of it, that it was in-your-face but utterly juvenile and silly at the same time.

So that inspired me to do something similar myself, and in the wake of the referendum I needed to get some stuff out of my system. I can’t draw at all, so it made sense that I if I was going to try and draw someone, it should be someone that deserved a rubbish portrait.

Unlike the badgers, Theresa May and company deserve our ridicule. It was interesting, because I had to spend a lot of time looking at pictures of people I hated, but then drawing them as quickly and badly as possible and inevitably, after a while, I started to get better (or less shit) at it, at which point I started giving them claws and fangs and exaggerating certain features.

On a serious note, they’re not just a farcical work of art. They’re thought-provoking. Why do you think those zines sold out so well at the fair? What is it about Shit Drawings that captures the visitors’ imagination (and these were clever people who read books)?

Hopefully it’s just the same as when I saw the badgers zine. It’s unexpected, and funny. A lot of people buy them for friends or relatives who loathe Boris, or in a few cases, for people who actually like him. It’s also a release from the seemingly never-ending horror of Brexit. It’s interesting to see how people’s reactions have changed over time since I started making them.

“A lot of people buy them for friends or relatives who loathe Boris, or in a few cases, for people who actually like him.”

When I made the Boris zine, it just seemed like he was lurking around, ready to make his move and stab someone in the back, and I would joke with people at fairs that he was our future leader. Now he is the Prime Minister, some people don’t even want to talk about him or Brexit, because it’s even worse than it was under May and most people have had enough of it. But hopefully people have had some satisfaction in defacing the zines. Maybe one day there can be an exhibition of what people have done to the pictures.

You also published poetry books, with memorable titles such as:

Not every writer has the confidence to write and publish their poems. Prose is easier than poetry. Where do you get that drive, confidence and conviction to put your words in rhymes and stanzas like that?

The poems in those books were written a while ago, over a period of a few years where I had a series of soul-destroying office jobs that I was commuting to every day, and my mental health was in pretty bad shape. So a lot of those poems were written in the moment, on the bus or the train, at my desk, or hiding in the toilet at work, trying not to lose my mind.

The most successful ones for me are the ones where I was able channel a moment of frustration or rage into a poem and while also turning it into something positive, or at least getting it out of my system. It was my only creative outlet at the time and I think it saved me, being able to exorcise some of my demons onto the page.

I was reading a lot of Bukowski, Dan Fante and people like that at the time; writers who are willing to share the more unpleasant aspects of themselves, but who do so in a way that is readable and relatable. At the risk of upsetting and alienating some potential readers and other poetry writers, I really don’t get on with a lot of poetry, especially if I have to wade through pages of waffle where it isn’t clear what someone is even talking about.

The poetry books always do well because they’re about work and day-to-day things and there’s a humour to them (often at my own expense). There’s also honesty and some darkness in there that isn’t always easy for everyone to talk openly about or share with others. So if someone can empathise or sympathise with an idea in a poem I’ve written, then they are slightly less isolated and cut off than they might have been.

“Until I went back to university in 2016, all my creative endeavours were self-taught.”

Zines used to be so popular in the 80s and 90s, before the internet and social media took off. You still publish zines, just like photojournalist Marc Vallée. What it is about the discipline of zine publishing that makes it so potent for direct action and speedy circulation? Do you see yourself in the tradition of Hogarth and Blake in your approach to publishing, illustration and poetry?

I just like the idea of freedom and being able to do something you’re passionate about, in a way where you can get it out into the world quickly, without anyone’s permission. I’m sure that could lead to some self-indulgent rubbish in some cases, but I would also say that applies to all publishing, from Fifty Shades of Grey through to self-important, impenetrable academia. And maybe everyone is spoilt now with the internet and the likes of Instagram, which are essentially generating free content, but I enjoy being stubborn and only putting out things in print.

There were two people at the London Art Book Fair (LABF) the other weekend who said they wanted to follow the artist of the Boris zine on Instagram (which they can’t) but wouldn’t spend £2 on a copy of the zine, which I found weird.

Zines are also a good way of testing ideas, to see if anyone cares about the thing that you care about. If you only make thirty copies of something and it doesn’t sell, hopefully you won’t have ploughed all your money into the project, and if people like it, you can easily make some more.

“Zines are also a good way of testing ideas, to see if anyone cares about the thing that you care about.”

I’m not consciously following any tradition but always think of it in terms of a punk or DIY ethic. I came into making zines and books quite late as well. When I went to school in the late 80s / early 90s, I was told I couldn’t do music because I didn’t already play an instrument and I couldn’t do art because I couldn’t ‘draw’. But what kind of privileged rubbish is that? I didn’t know any better at the time, so it took me a while to realise that you could just do your own thing and ignore the supposed wisdom and guidance of teachers. Until I went back to university in 2016, all my creative endeavours were self-taught.

Pre-2008 recession and Brexit, creatives – in my opinion – kind of sleepwalked through it all, ‘hiding’ behind our careers, mortgages, social aspirations and so on. I know I did this for quite a while. I wrote for trade publications, I worked in advertising, using my creativity to sell anything from pesticides to pharmaceuticals, banking services and makeup. We squandered our creativity, pretty much.

But now that we’re painted into a corner with Brexit and populism on the rise, do you think creatives will get the courage to use their voice for what it’s meant to do? To hold the mirror up to society?

I think if there are people out there with some kind of creative urge, then there will be a reaction from some of them to everything in life.

There should always be pure escapism as well, alongside more serious attempts to fight back or raise awareness – the likes of Dog Section Press, Darren Cullen and Special Patrol Group have been doing great political and social work for ages, to name but a few.

I think as long as there is someone there to inspire the next generation, then we might stand a chance. It’s just a shame that the political landscape has to be so dire in the first place.

What’s your vision for Less Than Five Hundred? How would you like us to remember your works in 50 years’ time?

That’s the equivalent of the job interview question where I’m asked where I see myself in five years’ time and I never have a good answer to that either.

I guess I would like some of our books or zines to have survived in the post-apocalyptic, post-Brexit landscape, so that when the electricity has gone out, small children can huddle around a single sputtering candle, while their grandparents explain to them what a ‘Boris Johnson’ was, or what ‘jobs’ and ‘freedom of speech’ were.

Stewart Lee – March of the Lemmings.

Print, always. If people are reading anything in any format then that’s great but I spend most of every day staring at a screen, so I struggle with e-books. And I love the smell of a new book or magazine.

About Less Than Five Hundred Press

Less Than Five Hundred will be exhibiting at the following events: