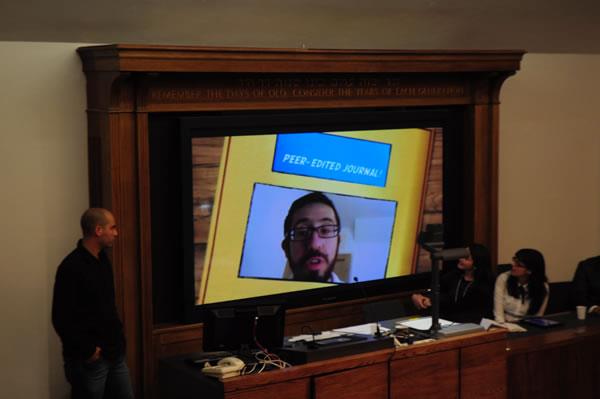 REPORT: “Whatever is to become of books?” at London Design Festival 2011. The video presentation by Dr Ernesto Priego of the Comics Grid at our event, “Whatever is to become of books?”, last week was certainly unconventional. It took a while for us to realise that many of the effects used in this video took their references from cartoons. But behind this unconventional presentation lies an even more non-conformist concept of an open access journal based on, you guessed it, comic books.

It is a very clever idea. Those who follow the development of open source platforms for scholarly journals would have been familiar about the gripes by academics and researchers on expensive subscription fees and the one-sided relationship that academics have with journal publishers that necessitate them to publish their works for free for journals which their institutions then have to subscribe (The New York Times. “Internet ruffles pricey scholarly journals”. 18 September 2011).

The Comics Grid operates on a model that serves as a unique point of reference for an online, open access peer-reviewed journal. Comic books might seem like a very popular art form, but this concept is very much rooted in academia. The journal examines the comic books in a rigorous manner, with the contribution “reviewed and edited by those who are signed in the project”.

Dr Priego, who did his PhD in Information Studies at University College London, focusing on the media-specificity of comic books, webcomics, mobile comics apps and comic book culture, says that the Comics Grid initially started out as an invitation-only initiative. Later, the founders decided to release calls for ongoing submission from graduate students, scholars, artists, teachers, curators, librarians or any others involved in the study and practice of comics or other related forms of visual storytelling.

Submissions, original and media-specific, written for online reading with an educational or academic purpose, must be between 750 and 1200 words in length.

Articles are released every Monday. To date, The Comics Grid has 4,550 visitors and 1,015 Twitter followers. Dr Priego is considering an online open access academic model where people can work together to review comic books no matter where they are, where they do not necessarily have to be at a university where they have to pay expensive subscription fees for journals.

For more information on The Comics Grid, go to www.comicsgrid.com and follow its tweets at @ComicsGrid. You can see the photos of the event at this Facebook link.

Reports: speakers’ presentations at “Whatever is to become of books”

“Five Minutes With”: Q&A’s with designers, authors and academics on the future of books

0 comments on “Meet The Comics Grid, an online journal of comics scholarship”