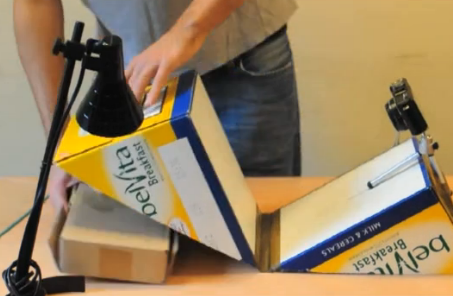 At the London Design Festival event, “Whatever is to become of books”, digital anthropologists Juliano Spyer and Cosimo Lupo showcased “Homer”, a book scanner constructed of everyday objects – a digital camera, a recycled box and a piece of glass from Poundland shop – powered by an open source software used by Google Books and a laptop. The scanned material is readable on iPad and computer as searchable PDF and text.

This digital nod to the Gutenberg press was shown at the event held at the Department of Anthropology, University College London (UCL), on 17 September 2011.

In this one-minute viral, the prototype is used to scan the King James I bible to mark the 400th anniversary of the completion of the authorised version in 1611. This is in line with the festival’s main showcase at St Paul’s Cathedral. The soundtrack is written by Brad Sucks, an “open source music” or “copyleft” initiative by Brad Turcotte.

The videography, shot using a combination of camcorders and Nikon D90, was done by Kevin Biderman, also of MSc Digital Anthropology. Biderman, a photographer, film maker and art lecturer, is researching on the e-books for the masters programme. The video was produced by Sojournposse.

Read the interviews on what’s to become of books on “Five Minutes With”.

Sojournposse’s event for The London Design Festival 2011, “Whatever is to become of books?” was held at the Gustave Tuck Lecture Theatre, Wilkins Building, UCL Main Campus, Gower Street, WC1E 6BT. Please follow our updates on Twitter at @sojournposseF8, following the hashtags #LDF11 and #storyofbooks. We are also on Facebook and Google+.

0 comments on “One Minute With: Homer, a nod to the Gutenberg press”