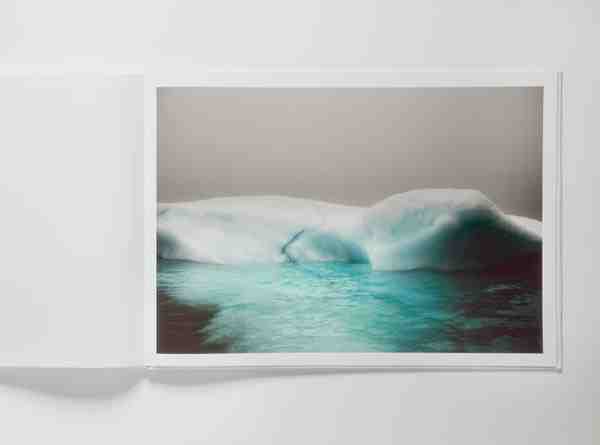 The heart of a global warming sceptic would thaw out at the sight of Simon Harsent‘s award-winning portraiture of the diminishing Arctic icebergs. He speaks to Zarina Holmes about the D&AD 2010 winner, “Melt – Portrait of an iceberg”, and the recent WWF ad campaign which combines his photographs with the poems of the renowned poet David Harsent, his father.

In 2010, Simon Harsent’s study on the journey of melting icebergs, “Melt – Portrait of an iceberg“, won the D&AD Awards under the Photography/Book Design category. The D&AD prize is awarded to the best in design and advertising in the world. The published print edition was designed by Ohplay agency.

“Melt” is a timely story, a lament on the changing climate we are facing. This work led to the collaboration with his father, poet David Harsent, on a recent WWF campaign on climate change awareness. In his photographs, we see layers of varying degrees of colour intensity: of sea waves, rainforest canopies, and the eroding face of an iceberg, composed in a manner that mirrors Harsent the Elder’s figures of speech:

If the photopoetry series is a musical composition, then it is a counter-melody of the two types of representation: the visual and the verses, a forward and backward play of depth-of-field, spatial dimension, alliteration and iambic pentameter.

Harsent explains to Sojournposse how literature informs the creation of his commercial and artistic photography work.

Q: Melt – the journey of an iceberg, is beautiful and melancholy. Is that your comment on the current climate issue we are facing?

I guess to sum it up, the icebergs is a metaphor for my journey, as the current of the ocean affects icebergs, effectively taking them to their own unknown destination. The people we meet and the roads we take in life take us to our unknown destination. The reason for icebergs is that when I was 11 years’ old I did a painting of an iceberg crashing into the Titanic. This led me into perusing painting and developed a love of the visual arts, that later lead me into becoming a photographer. Which has in turn lead on the path I am on now.

I’m fascinated by what you would call a ‘personal butterfly effect’, in exploring this concept I was drawn back to what essentially was a defining moment for me.

Q: I saw your interview on Youtube for Canon, mentioning poetry as your inspiration. Which poet influenced you, and does literature influences your image making process? (It’s near Burns’ Night and you are British, so I think it’s appropriate to ask your opinion).

The poetry reference I made in the Canon video was to my father (David Harsent) who is a very successful poet in the UK. He has been an incredible inspiration to me in every aspect of my life. I grew up being surrounded by books, and when you have a poet as a father your never really going to have the traditional childhood I guess.

I’m ashamed to say I don’t read as much poetry as I should. But I do find it’s a fantastic way to tune ones thinking when approaching a project. It allows you to create a sensibility and a mood in the same way good music can transform the way you feel.

Literature has obviously been a big part of my life, but as I’m dyslexic to do struggle sometimes. I’m quite a fan of existentialism; Albert Camus work has been hugely influential for me. More often than not I’ll select a book and a piece of music (or playlist) to take with me that helps me with the sensibility of the piece.

I did two trips to shoot the icebergs one to Newfoundland and the other to Greenland. For the Newfoundland trip I re-read Ernest Hemingway’s “Old Man and The Sea”. I liked the idea of someone hanging on to something, despite the fact it could endanger them and always has the possibility of ending up being a futile exercise.

For Greenland, I took a copy of T.S.Elliot’s “Selected Verse” which I read very little of but had it close just in case.

I also look at a lot of art, paintings mostly. Before I went and shot “Melt” I spent a lot of time looking at Rothko paintings.

Q: Is “Melt” your comment on current climate issue we are facing? Would you call that work photojournalism?

I wouldn’t call “Melt'” photojournalism. The premise from where it comes from is more of an expression of a journey. The images are presented in way to take the viewer through that journey. And the colour pallet and composition are intended to create the mood of the journey, so it’s been very thought out. I always think of photojournalism as being about reacting to you surroundings in a much more spontaneous manner. I would like to think of [“Melt”] as a piece of art if anything.

Q: You have won an important design award, the D&AD. How important is it for a photographer to understand design, and collaborate with good designers to present their work?

I love good design! And I love it when photography and typography are used to create something amazing. You don’t see enough of it these days, in my opinion. I loved the work of Neville Brody and David Carson, and how they revolutionized print design in the 90’s. I’ve worked as a commercial photographer since I was 21 and understand the impact that great design can have. So I believe the relationship between designer and photographer is a very special one, and it needs to be one based on trust.

Jon Nah and Ken Tan at Ohplay who designed the book (and the website) just got it straight away. They instantly understood the imagery and designed what I think is a wonderful piece of typography. I love working with the guys. They have done numerous pieces with me over the past five years and they just get where I’m coming from. We work from the same sensibility. The latest a series of quarterly Wallpapers and Screensavers are done just for the sake of it.

Q: Many news photojournalists are reluctant to be associated with advertising. But I find your work (for example, the disappearing gorillas for WWF campaign) tells the story about the issue effectively. How do you bridge the gap between selling a brand and telling a story / delivering a message?

As I mentioned I do a lot of commercial work so I’m not precious about that kind of work. It is essentially functional work, has to work within certain perimeters and is a discipline in it’s self. I enjoy this but it is different from my personal work. But to a degree the two go hand in hand, and I can draw from each other, which expands not only me – but also the pot I draw from.

I don’t have a problem with advertising, when it’s done well. It’s a massive part of our culture now. I’ve been shooting ads for over 20 years and it’s taken me all around the world and given me some amazing experiences. If done right it can be incredible. As a form of communication it is a reflection of the culture and trends of the moment. So eventually some of the work I have shot will end up having a historical value, I hope. For example, the work I shot for the Aids Council of NSW is in the permanent collection at the Queensland Art Gallery in Australia.

The thing I like with advertising is that you are still telling a story. Sometimes not a very interesting one, but the idea gives you a jump point. The trick then is to make it as beautiful as possible without overpowering the idea. I like this challenge and I also like the collaboration it brings, with quite often very talented people.

How the WWF stuff came about was friends at the agency involved had just come up with the idea of the disappearing animals. We were talking about it and I offered to let them use an outtake from the stuff I had shot for “Melt”. When I saw where they wanted to take the rest of the campaign, I offered to go and shoot it, probono. I think we are in a powerful position in advertising and have reaped a lot out of it – so it is nice to, without sounding like a cliché, give something back. For that reason I didn’t have a problem with using my personal work in an ad.

We just recently did a follow up campaign based on the disappearing planet where my photographs were set to the poems by my father – which was incredible, to be able to collaborate with him!