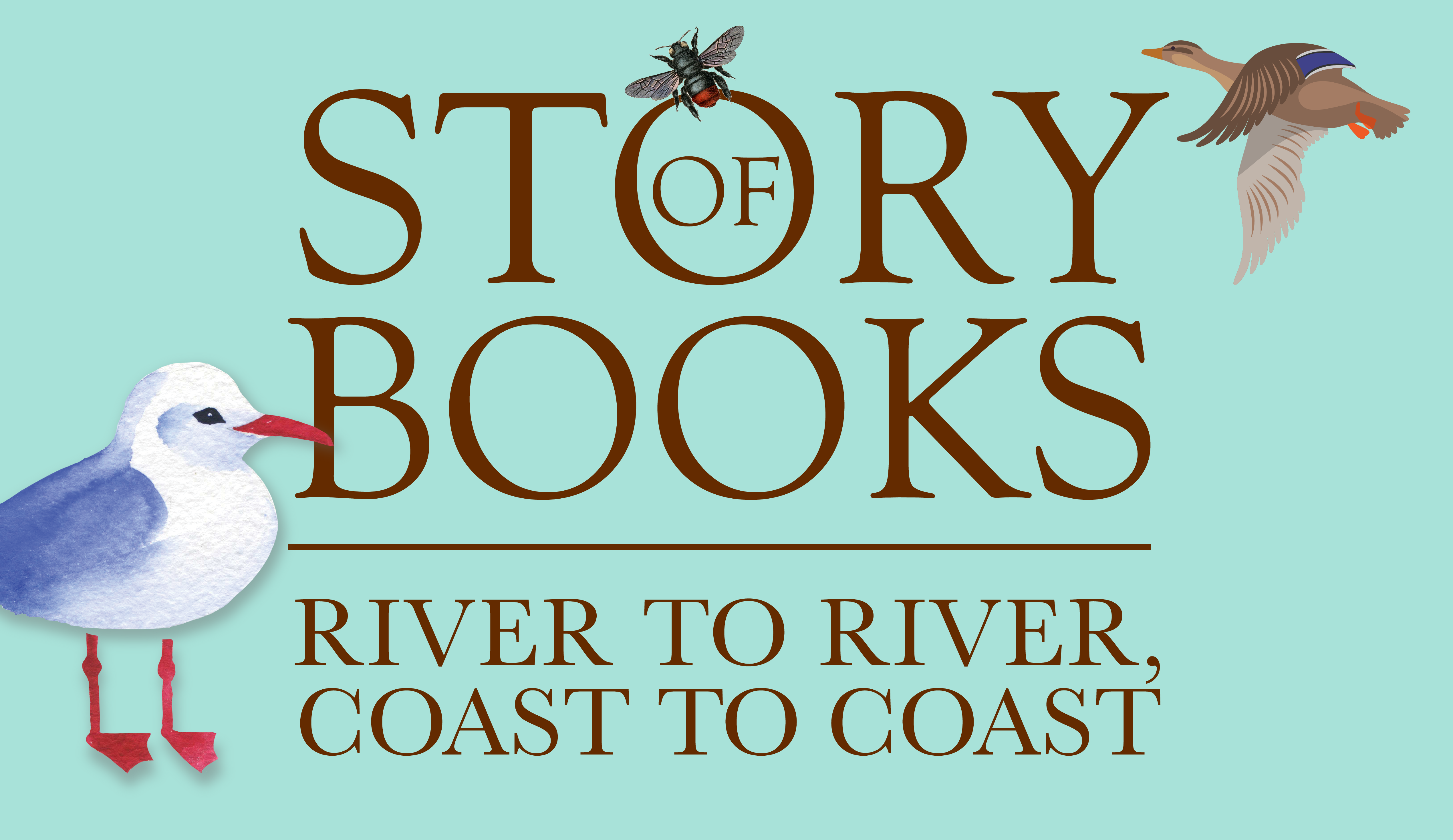 After The Rain was launched at an arts event with a simple premise: we talk about our waterways and pollution through art. What began as outrage at plastic pollution turned into artworks, poetry and prose. Still, the step towards self-publishing, even for a righteous cause, takes great courage. Story Of Books explains the concept behind its debut print publication, and the heroes – authors, artists and books – that inspire “River to river, coast to coast”.

On 8 June 2019, Story Of Books celebrated the launch of our first print title, After The Rain, at “River to river, coast to coast”, an arts event backed by HF Artsfest.

We had spent a considerable time during winter 2018 planning an edition called “Summer Of Heroes”. Initially, we wanted to focus on superheroes, with MCM Comic Con in mind. That, however, took an environmental turn after we had spent Christmas on Pangkor Island, Malaysia. We had experienced an internet-free holiday reading, enjoying nature – at the same time witnessing plastics from passing merchant ships being washed up on the beach.

“River to river, coast to coast” was not a one-off ‘woke’ event on the environment. We think in centuries. After we were asked by HF Artsfest to participate, we discussed our idea with Re:Centre Hammersmith. They mentioned the mudlarking their artists are doing. We wrote the programme and curated the event with their resident artists. We also invited Mark King, publisher of The Point to present his point of view from Devonshire.

The premise of the event was simple: we talk about our waterways through art. We talk about the pollution in the Straits of Malacca, the rubbish in the River Thames and plastics on the Devonshire coast using photographs, books, magazines, slideshows and rubbish – plenty of them – to make our point.

Initially, we wanted to focus on superheroes, with MCM Comic Con in mind. That, however, changed after we had witnessed plastics from passing merchant ships being washed up on the beach.

The debut issue of After The Rain is a visual meditation on nature. It featured only two images on rubbish. That was enough. Their objective is to rudely interrupt your experience of a beautiful photo essay.

We want readers to understand two things: Pangkor Island is a paradise; the plastics on the beaches are an unwelcome intrusion. The Straits Of Malacca is one of the busiest shipping routes in the world. The merchant ships are meant to be passing, not dump their waste along this route.

We want readers to understand two things: Pangkor Island is a paradise; the plastics on the beaches are an unwelcome intrusion.

A bone to pick, literally

At the event, Re:Centre resident artists Kate Lowe and Natalie Cronin explained the concepts and rationale behind their collaborative project, Thamesis.  Lowe formally introduced us to the art collective. She cited mythology, Charles Dickens and poet Mary Oliver as inspiration.

Thamesis artists are building a series of artworks and installations made of artefacts collected from River Thames. These include rubbish and bones. Cronin, the second artist to present her work, invited guests to “pick a bone” from a tray of bones. Afterwards, guests were taken on a studio tour where they got to see more bones and river objects that make up the artworks.

What we learned from Cronin is that everything is made of bones. The carcasses, perhaps bodies, that ended up in the Thames became sand.

What we learned is that everything is made of bones. The carcasses, perhaps bodies, that ended up in the Thames become sand.

Leave only footprints, not rubbish

Mark King, publisher and photographer of surfing magazine, The Point, came all the way from Croyde, Devonshire, to talk about his magazine, surfing and the environmental movement in Devonshire. In an earlier interview with Story Of Books, he highlighted the effects of tourism, leisure industry and “second homes” to Croyde’s landscape. At “River to river”, he drove home the message again that human consumption at a massive, uncontrolled scale comes at a cost.

During the presentation on After The Rain, our Creative Director, Zarina Holmes, joined the dots between population boom, consumption and plastic waste. She presented a series of maps of Pangkor Island, Croyde, and Fulham and Hammersmith. King pointed out that the Devon county population of about 800,000 can swell three times its normal size in summer. You get the gist. That takes a toll on the environment.

The Devon county population of about 800,000 can swell three times its normal size in summer. That takes a toll on the environment.

For the launch of After The Rain, Holmes designed a Southwest London nature trail map. The maps were handed out to attendees so they could explore the riverside area after the event.

The borough of Hammersmith and Fulham is littered with historical landmarks such as Fulham Palace, Bishops Park and Hammersmith Embankment. Holmes was inspired to design the map after reading a few books about the history of Fulham, borrowed from the Fulham Library. However, she found very few books on the flora and fauna of Fulham. Being a graphic designer, she decided to create an infographic map placing these key landmarks within the context of a nature trail.

Also, Re:Centre Hammersmith is a stone’s throw away from London’s foremost wildlife conservation area, the WWT London Wetland Centre, which sits in the London Borough of Richmond Upon Thames.

The map is the first of After The Rain nature trail map series, aimed at fostering active lifestyle and wellbeing for the general public.

Holmes was inspired to design the map after reading a few books about the history of Fulham. However, she found very few books on the flora and fauna of Fulham.

A few weeks before the events, GLUE Studio, the publisher of Story Of Books, spoke to several influential figures in Malaysia to underline the urgency with regards to plastic pollution and the illegal shipping of recycled wastes to the country.

Fortunately, our concerns were their concerns. The authorities wasted no time to announce to the world that fraudulent shipping of recycled plastics to the country is to be stopped. The plastic waste will be returned to the countries of origin.

Two days after our 8 June event, The War On Plastic, fronted by Hugh Fearnley-Whittingstall and Anita Rani, was aired on BBC 2. In Episode 1, viewers were treated to a horrific view of plastics the size of a hill. Many were not meant to leave the country of origin including the UK. It’s a totally different narrative compared with the gentle photo essay of After The Rain. But the message is the same: we’re choking nature with plastics. We have to re-consider the way we consume things.

A special thanks to our heroes

“River to river, coast to coast” would not be possible without our heroes. On International Mother’s Day, we opened Summer Of Heroes with an interview with Jane Wenham-Jones about her novel Mum In The Middle. Heroes don’t necessarily wear capes and have super powers. A single mother with a day job and three grown children is the most ordinary hero, but a hero nonetheless. We were inspired by what Wenham-Jones told us: “Write what you know”.

Next, we looked to our tradition for heroes written about in mythology and history. Tintoy Chuo, designer and founder of Fusion Wayang Kulit, told us how he translated Star Wars characters into Malaysian shadow puppets with the help of an anthropologist. It’s an ancient art that needs to be preserved. To make it relevant, however, shadow puppets have to make space for old and new types of heroes.

Tagame Gengoroh’s talk on the gay manga, My Brother’s Husband, reminded us of the key tenet of heroism: courage. We decided to frame the coverage under “Romance” because essentially, that’s what it is. At MCM Comic Con, comic artists Mike Zeck, John Beatty and Howard Mackie revealed what made them heroes to Creative Directors: the high standard they place on their works of art. Neil Gibson of Twisted Dark taught us that heroes get knocked down, but aren’t easily discouraged by rejections.

Although their events were three days apart, Frisson Comics (at MCM Comic Con), and Dr Brian May (at the Science Museum), reiterated the message that the environment and social welfare should be at the heart of our technological advancement. Frisson Comics uses dystopia, fear and horror to tug at our heartstrings. Dr May uses space science and 3D photography to make his case.

We read Good Omens during Christmas holiday on Pangkor Island. In the book, one of the four riders of the Apocalypse, Pollution, conspired to destroy humanity with plastics and toxic waste. “Pollution” was on our minds as we picked up the rubbish littering the beach.

During our internet-free holiday on Pangkor Island, the Editor spent the time reading Good Omens by Terry Pratchett and Neil Gaiman. In the book, one of the four riders of the Apocalypse, Pollution, conspired to bring an end to humanity with plastics and toxic waste. “Pollution” was on our minds as we picked up the rubbish littering the beach near where we stayed. At the Southbank Centre, we heard how Gaiman adapted the Doomsday comedy for Amazon Prime. The end of the world might not end with an Anti-Christ but rather, with climate change.

Hello Folks. We’ve been travelling a bit and have now settled on a tropical island somewhere for Christmas. We’ll be back with the usual roundup – whilst finishing this 👇🏼 (halfway through “Good Omens” now. Yes. We are SLOW at reading). @neilhimself #storyofbooks pic.twitter.com/MPIWkNc0cP

We are also indebted to friends who inspired us with their determination to publish their own creative works: Steven Lee, founder of Kuala Lumpur International Photoawards, who wrote the foreword; Bada Song, Publisher, Eeodo; Nik Pollinger; FR Di Brozolo; Phil Mac Giolla Bhain; Julian Macqueen and Toby Charkin who came up with the strapline: “The book is dead, long live the book”. Publishing is not easy. Self-publishing, even more so.

How else would indie publishers package their products if not using plastic?

Story Of Books is not anti-plastic. Not really. The printouts we ordered from Blurb Book for the event ironically came wrapped in plastic (Ed: We have asked Blurb Book to look into this). We are aware that small businesses, especially in rural areas, use plastic to scale in order to sell their products. Look at the indie booths at MCM Comic Con. How else would indie publishers package their products if not using plastic?

Plastic, like love, is designed to last forever. It was the answer to scarce natural resources caused by World War II. However, when appropriated to suit a single-use throwaway culture, plastic becomes a ghost that doesn’t go away. It lurks in our seas and rivers, and preys on our conscience. Over time, it becomes a monster. But it doesn’t have to end up that way. Until we figure out a way to solve this, it’s our job as storytellers to keep reminding you of things to come – be it in images, comics, horror or comedy.

Plastic is designed to last forever. When appropriated to suit a throwaway culture, it becomes a ghost that doesn’t go away.

About After The Rain

HF ArtsFest organises over 200 open, inclusive art events with over 100 partners from performing arts to literature, visual arts and film every June across the London borough of Hammersmith and Fulham. www.hf-artsfest.com